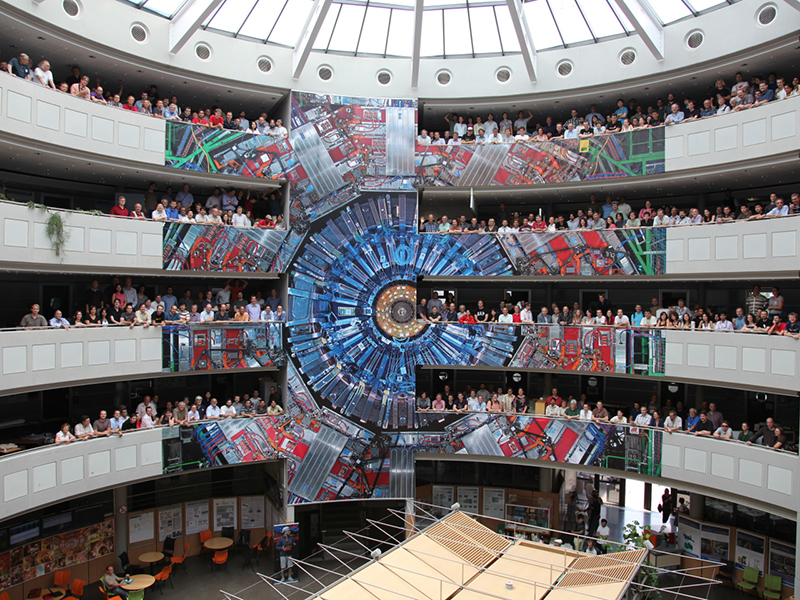 Some members of the CMS Collaboration in and around a real-size photograph of the detector (Photo: Achintya Rao)

It’s been a long road…

It can be said that CMS was formally founded on 1 October 1992, when nearly 500 scientists from around the world submitted a Letter of Intent to the LHC Experiments Committee (LHCC) on behalf of the Compact Muon Solenoid Collaboration. But the first concept for the CMS detector was presented at a workshop in Aachen, Germany, in October 1990. The concept called for a solenoidal magnet that could produce a magnetic field of 4 tesla, crucial to performing precision measurements of muons produced in collisions at the LHC.

By the time the Technical Proposal was submitted in December 1994, the collaboration had grown to over 1200 scientists, doubling the number of participating institutions. Michel Della Negra, the first Spokesperson of the CMS Collaboration, recounted the story of the early days of CMS over a decade ago. In that same edition of the CMS Times, published in 2006, Alain Hervé, who was the first Technical Coordinator for CMS, told the tale of the evolving design of the detector. Both stories make for fascinating reads!

In the two-and-a-half decades since the CMS Letter of Intent was signed and submitted, the detector itself has been constructed by an ever-growing collaboration, has been installed in its underground cavern, has recorded data from the LHC at energies of 7 TeV, 8 TeV and 13 TeV, and has given us a monumental success in the discovery of the Higgs boson in 2012.

This little stand-alone website celebrates the achievements of the CMS Collaboration, allowing us to look at the many faces and places involved in this global endeavour and enabling us to get unique perspectives from CMS members who are as old as the collaboration they are part of. We hope you like what you see, and that you will join us in celebrating not just the past 25 years of success after success but all the years of scientific enterprise ahead of us.

In October 1992, a ‘Letter of Intent’ was submitted to the LHC Experiments Committee (LHCC), offically marking the formation of the CMS Collaboration. This website commemorates the 25th anniversary of CMS, celebrated in 2017.